It — That Day — snuck up on me this year. Granted, I’ve had a lot on my mind the last month:

So it makes sense that I felt distracted while attempting to work last week. I missed my precious baby granddaughter (and her parents) while I dealt with Irma issues. Even so, I’m usually better able to tune out distractions while polishing prose — whether my clients’ or my own.

As that long, long week drew to an end, realization hit me. All at once, I understood what kept my attention blowing aside, why my mind felt muddled, where the eye of my inner storm hit a wall:

In a handful of days I would complete my seventh year as a widow. I once again faced the anniversary of my husband’s unexpected death.

Odd and disrespectful as it sounds to admit this, I laughed when I recognized how few days remained before this year’s deathiversary. (Yes, I know that sounds awful!)

But I couldn’t help it. In fact, I felt almost giddy. (That sounds even worse, doesn’t it?)

That the date snuck up on me felt like a victory of sorts. This year, I’d finally functioned (reasonably well) through the early days of September. Mild distraction — easily attributed to gratitude and gladness over becoming a grandmother as well as the harried hurry of hurricane hassles — proved a gazillion times better than the overarching, insurmountable, emotional maelstroms of previous Septembers.

People tried to rush me through the grief. “Don’t worry. You’ll feel better in time.” But in that new grief I didn’t need to be told my life-changing loss didn’t matter. The best consolation came from those whose honesty acknowledged my life would never be the same. I needed to hear that the devastation I felt made sense.

But I also heard hope — hope I couldn’t yet believe but needed anyway — from other widows (and widowers) who’d lost their spouses longer ago than I had. I felt validated when they said things like, “It’s okay that you’re falling apart” — and I really had fallen apart at the time — “because this is the worst thing that could have happened.”

Or they’d caution me by saying, “Sometimes it might feel even worse than it does right now, but it won’t always feel this bad.”

Then I asked the naive question only someone desperate not to feel so awful will plead: How long? How long will this grief tear me up? How long until I feel like myself again?

It seemed impossible to survive with grief’s ache for three hours at at time, much less three years. But their frankness assured me it was okay that I didn’t “bounce back” right away (despite other folks’ well-meaning, ill-informed attempts to urge me to “get over” my mourning).

Time and experience certified their counsel as reliable. Starting over takes time — emotionally, physically, financially, socially — and learning to live onward after the death of a loved one requires starting over. At my husband’s three- and five-year angelversaries, I knew I still had a long way to go, but I could see how much progress I’d also made.

Now, heading into the completion of year seven and the beginning of year eight, I more than see that progress — I feel it.

No doubt there will be setbacks. Life and love and grief are built that way.

And I might yet need to dive into a carton of Publix Chocolate Trinity on the day before and the day of his death, if any of the local stores have started receiving ice cream in their post-Irma shipments again, that is. (See Grief Meltdown in the Ice Cream Aisle for more about this yummy flavor.)

I laughed again while I typed the lines just above. In the background, I heard this song by The Piano Guys with Sir Cliff Richard. A  few years ago, maybe even last year, I wouldn’t have believed the words these great artists sang. Back then, I couldn’t, but now, I do believe “It’s Gonna Be Okay.”

Parents mourn their lost babes of every age. Whether children died in utero or during infancy, whether they perished as toddlers or tweens or teens,  or whether death took them by surprise accident in young adulthood or inch-at-a-time illness in middle age, they died out of order. As humans, we’re wired to expect that children won’t die before parents, so when it happens, it’s unthinkably cruel, indescribably painful.

If you’ve wondered how to console friends who’ve lost a son or daughter, bless you. Too often, bereaved parents lament over deepened, inflicted pain from ill-thought comments. Or, when grieving parents most need support, they feel the added ache of uncomfortable, abandoned absence from those who avoid them.

I’ve not suffered the death of a child, although I’ve witnessed friends in such agony. I’ve listened to them and sat with them in their losses. But seeing and hearing and sitting isn’t knowing. Empathy extends only so far.*

Here’s what my friends have taught me as they’ve grieved their dear children’s deaths: 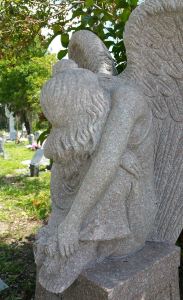 You can’t fix grieving parents’ pain, but you can avoid worsening it.

You can offer increased support to your grieving friends by saying:

You can also offer comfort to grieving families through these actions:

Cut mourning parents some slack if they ignore phone calls, bail on social engagements, or don’t seem like themselves. They aren’t themselves anymore. Part of their self-identity (as Son‘s Mom or Daughter‘s Dad) was shattered.

If you have children the same age as your friends’ deceased child, be aware that bereaved parents might seek more interaction with you and your family — or less. Continue reaching out either way.

*Please forgive me, my dear friends who’ve mourned children, if I’ve tread on tender feelings or gotten this wrong. You’ve taught me more about endurance and living with loss than I’ve learned on my own, and my intention is to honor the grief you’ve borne for the children you’ve lost and continue to love.

**The title of my friend Melissa Dalton-Bradford’s book, On Loss and Living Onward: Collected Voices for the Grieving and Those Who Would Mourn with Them, came to mind as I wrote of living “onward again.” I’d planned to type “move forward,” but her better word landed at my fingertips instead.

In the final days of his life, his name became well-known beyond the circle of his immediate family and their friends. I hope there will be an equally widespread outpouring of support for his family. Please forgive me if this sounds presumptuous, but I’d like to reiterate principles to remember for anyone who may be reaching out to his grieving family.

[Note: Right now I’m too close to the emotions of the topic, so I’m modifying excerpts from two previous posts. (*For links to the original blog entries, see the end of this one.)]

Grieving the death of a loved one — especially a child — defies description.

Even others who’ve experienced a loss of similar devastation can imagine only a fraction of what grieving parents, siblings, grandparents, aunts, uncles, and cousins face. Every relationship between souls is unique, as is each loss.

Some principles, however, apply to comforting the bereaved in almost all situations. The link below is to a post called “6 Things Never to Say to a Bereaved Parent.” The writer, Angela Miller, tells exactly how some of the most commonly used but least helpful platitudes come across to mourning souls. Please read her article for helpful insights into what NOT to say (http://stillstandingmag.com/2014/01/6-things-never-say-bereaved-parent/).

I’ve summarized her main points below, but please, please see her full article!

I’ve not experienced the death of a child or sibling, so I don’t claim to know that pain. I do know that in each of the losses of my own life, the sentiments Ms. Miller describes are similar to what I felt and to what friends have expressed their feelings to be.

Children grieve as deeply as adults, but they lack the maturity and experience to identify and put words to their feelings.

Here are some things NOT to say to a grieving child–of any age:

Here are  HELPFUL things to say to a bereaved child–of any age:

Thank you for taking the time to read what is and isn’t helpful to mourning families. While nothing you can do or say will make things “better,” you can make an uplifting difference by showing that you care.