It’s been (early) Christmas at my house for more than a week now; we’re wrapping up (or should I say we’ve already unwrapped?) our holiday celebrations — all but the church service — before December 25. It’s been wonderful having my kids here and celebrating together — this has been a lovely holiday season, our seventh without my husband, their father.

During a few moments, though, “old” grief barged in, casting its shadow across the glow of today’s Christmas lights and shoving me back toward the way I felt when grief was raw:

For the most part, in day-to-day life, I’ve learned. I’ve grown. I’ve adjusted to living without him at my side. As I’ve shared above, sometimes it “still” hurts, but not as sharply as in the traumatic first and second years after his death.

Much felt hazy in widowed fog back then. Yet I remember the numerous people who attempted to console and comfort me during those difficult, raw years — especially during the holidays. I appreciated them for speaking and reaching out — for not ignoring me — even when some of their efforts were less comforting.

I also remember the many kind, supportive words and gestures that lightened my emotional (and physical) burdens while acknowledging my bereavement during those earliest grief-filled holiday seasons.

Think back over your year. Did any of your friends lose loved ones? If so, please reach out to them. The holidays can be especially lonely and difficult while mourning. It’s not too late — it’s never too late — to say, “I’m thinking of you” — unless you never say it at all.

Wishing you and yours moments of peace and joy in your holidays. If’ you’re mourning this season, I hope those around you will reach out and show you they care. 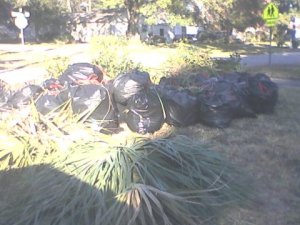 This is only a portion of the debris cleared away by the men from church. The “bushes” behind the trash bags are piled limbs hauled out to the street. (The poor lighting reflects my scattered state of mind at the time.) Photo by Teresa TL Bruce, TealAshes.com

*The day our church brothers brought the Christmas tree, they did more than that. They opened their eyes and looked around as they hefted the pine out of a pickup truck and into the house. While setting it up in the stand, they asked, “Sister Bruce, do you have anyone helping you out with your yard?” (By what they’d seen, the answer was obvious, but to their credit they asked anyway.) To read about the amazing service they gave my family soon after, please see Better Questions than “How Are You?” Part 3 — What to Keep Asking.

What are your thoughts on this topic? Cancel reply

This site uses Akismet to reduce spam. Learn how your comment data is processed.