A  reporter covering one of the funerals for a victim of the Pulse nightclub shooting a couple of days ago said “healing is well under way.” 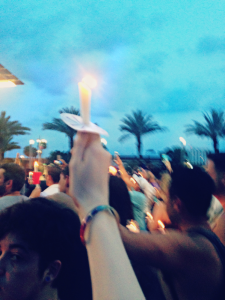 I don’t dispute that in the wake of this tragedy, kindness and generosity abound. The outpourings of support proclaiming #OrlandoUnited and #OrlandoStrong reveal facets of the goodness surrounding my city and, in fact, the world.

That’s as it should be, and it will aid future healing.

But this — scarcely a week later — is far too soon to say “healing is well under way.”

Grieving is a journey without shortcuts. Mourning takes time, but right now, the traumatized and injured survivors and the victims’ families are in shock. (As a community, we all are.)

The grief that comes with the first onslaught of knowing your loved one has died is a loud, brutal bullying earthquake. It rattles your body and soul so hard you are forever altered. You may resemble yourself on the outside, but you know that’s not you anymore. The cells inside you have tumbled, twisted, crumpled into positions and shapes nature never intended.

That kind of upheaval takes time to recognize, time to adjust to, time to heal into. Note, please, that I said “heal into,” not “heal from.”

When author C.S. Lewis’s wife died, he vented his grief in a series of journals meant only for himself. Later published as A Grief Observed, it was one of the most healing, cathartic books I read after my husband died. The agony Lewis poured unfiltered onto the pages reflected the scattered, shattered state of my own emotions.

He compared grieving his wife to an amputation. In time the wound itself would stop bleeding, the tissues would seal, and he would learn new ways of “walking” as a widower — but that accustomed limb would always be absent, and that different way of moving about would never be the same.

He would heal but never again be whole.

How long before it’s acceptable to say Orlando’s “healing is well under way”?  I can answer only with another question: How long does it take to heal from the sudden, traumatic, much-publicized loss of your loved one? (Go on. Pick a figure. Decide how long you think it might take until you’re healed or “over it.” Double it. Double it again. For good measure, triple it. You might be getting closer — or not.)

My mother died as peacefully as possible after a brave and dignified battle with cancer over 20 years ago. My husband died without warning due to medical causes never fully identified over five years ago.  I no longer actively mourn them every day, but for years I did.

I think I’d been widowed about a year and a half before I realized — for the first time — I hadn’t cried over him that day (which realization, of course, made me cry again). A year and a half.

To say “healing is well under way” at less than two weeks is inaccurate at best, injurious at worst. No one should be made to feel rushed in their grieving or as if they’re “failing” by not following another’s expectations.

My life now is rich and full and I love it — though five-plus years later I still face obstacles and hurdles my late husband’s death raised, challenges which, frankly, I’d much rather not have to deal with.

And there will always be days and dates that make “healed” wounds ache and reboot the pain of loss — like Father’s Day, with the father of my children no longer alive, or my would-have-been-30th wedding anniversary next month …

For mourning families and friends, for recovering injured (and traumatized) survivors, for the LGBTQ community who were targeted by the evil shooter, for the employees at Pulse and surrounding businesses, for the first responders and medical personnel, for the greater Orlando area at large — life will never be the same again.

In time and with nurturing care, there will be healing, and every kind act aligns us in that direction.

But it does take time. If you know someone who has lost a loved one, find out birthdays and other significant dates. Enter them in your calendar. And commit to keep reaching out — not just now when the tremors are still visible but in the weeks, months, and even years to come — when mourners are settling into their shifted foundations.

Your long-term acknowledgment will help healing begin to get better under way.

5 thoughts on “Healing and Grief — “Well under Way” or Not?”

What are your thoughts on this topic? Cancel reply

This site uses Akismet to reduce spam. Learn how your comment data is processed.